With two spots in the final already taken, five new participants will take to the stage at Háskólabíó in a bid to win the remaining two places. Another two other lucky artists from both semis will receive a wildcard to the final from a jury. Come join us for a closer look at the final five and see if you can pick out any favourites.

Guðrún Árný Karlsdóttir should be a dab hand at the game having previously taken part in 2006, but she will be in for some stiff competition from kiddies’ favourite Pollapönk. María Björk Sverrisdóttir made it to the final in both 2011 and 2012 with two compositions, Nótt and Hjartað Brennur respectively. Her entry Stund Með þér performed by Sylvía Erla Scheving failed to make the finals last year, so she is looking to make something of a comeback this year with Guðbjörg Magnúsdóttir performing her entry Aðeins ætluð þér. Without further ado, let’s take a closer look at the final five Icelandic participants. 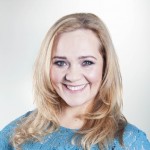 Sigríður Eyrún Friðriksdóttir was born in Reykjavík on the 9th of May. She was raised both in Breiðholt and in Odense, Denmark. She has a daughter together with her partner and composer of her entry, Karl Olgeirsson. Sigga Eyrún as she is otherwise known is a qualified primary school teacher after having graduated from the University of Iceland. To add to her talents, she also studied music at the Guildford School of Acting, Surrey, United Kingdom in addition to The Reykjavik Academy of Singing and Vocal Arts and The Icelandic Academy of the Arts. She has her hands full working as both a singer and actress and is currently starring in the role of Mrs Corry in the musical production of Mary Poppins at the Reykjavík City Theatre. She also makes up on half of the duet Viggó & Víóletta, as well as dubbing cartoons such as The Moomins and Peppa Pig to name but a few. Sigga Eyrún has also featured in the TV programme Stundin Okkar and is currently working on her debut album. Her singing career began quite a while back, when she took part in a karaoke competition in 1992, with none other than Páll Óskar as compere where he introduced her by adapting Whitney’s hit The Greatest Love of All by singing "I believe that Sigga is our future..."! 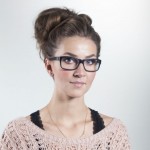 Guðrún Árný Karlsdóttir is 32 years old and was born in Reykjavík but lives together with her husband and two sons in the town of Hafnarfjörður in western Iceland. She has previously studied at the Flensborg secondary school and has a bachelor degree in music and teaching. Guðrún Árný is an accomplished musician and learned to play the piano at the age of 16. She won the song competition Samfés convincingly in 1997 performing the Whitney Houston number The Greatest Love of All and she also went on to win the Icelandic Secondary School Song Contest in 1999. She has been a keen choir singer for quite some time and has been teaching music to primary school children but also has a separate career as a singer. She has participated in the Icelandic preselections on a number of occasions, both as a pianist and as an artist in her own right, performing the song Andvaka in the 2006 national final, coming 6th. She is an ardent fan of Eurovision and naturally can’t wait to take part in this year’s edition of Söngvakeppnin. 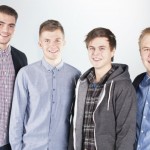 The band F.U.N.K. came about as a result of a group of friends and musicians coming together after having worked on various projects. Pétur Finnbogason plays bass, Hörður Bjarkason is on drums, Franz Ploder Ottósson is the singer, Egill Ploder Ottósson plays piano and Valbjörn Snæ Lillendahl is on the guitar (he isn’t featured on the group photo). Franz and Egill are brothers, all of the band members are twenty years old and hail from the Reykjavík area. Together, the members of the band have a wide range of musical influences, listening to everything from Led Zeppelin to Justin Bieber. Band members Franz, Pétur and Lárús wrote their entry Þangað til ég dey and the idea of participating in the Icelandic preselection only occured to them a mere five days before the registration deadline was to close. They swiftly took action, creating their entry in a matter of hours. Some of you might recognise the faces of both Pétur and Franz – they came second in the Icelandic final in 2012 as part of the boyband Blár Ópal with the dance song Stattu Upp! Franz and Hörður took part in another song contest almost by accident, again coming second, so two seems to be their number! 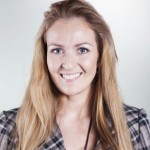 Guðbjörg Magnúsdóttir was born on the 13th of September 1974 in Reykjavík. She lives there together with her husband and five children. She is a professional singer and teaches singing at the Complete Vocal Insitute. She remembers the first time she performed in public as if it were yesterday. It was together with the group Kandís at Hressó in 1993, a nervewracking experience by all accounts. The reaction was overwhelming and was one of the pivotal moments that made her realise that singing was her thing. Her debut album Vindurinn Veit (The WInd Knows) was released only a few weeks ago but prior to that, she has provided vocals on a number of popular cartoons as well as radio and television commercials. Guðbjörg has previously collaborated with the group Dúndurfréttir in a production of Dark Side of the Moon whwich met with rave reviews after showing at the Reykjavík City Theatre. Other notable merits on her scorecard include appearances in an ABBA tribute show. The song Aðeins ætluð þér was written for Guðbjörg by her colleague María Björk Sverrisdóttir, a noteable name in Icelandic music – she is the founder of the Complete Vocal Insitute and has previously co-written Jóhanna’s Nótt from 2011 and Regina Ósk’s Hjartað Brennur in 2012. 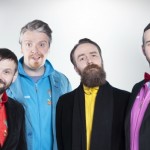 Pollapönk describe themselves as a band for everyone; for men and women, for kids with wild hair and balding men! The band was formed in 2006 and have three albums to their name. Their self titled debut appeared that same year and was the graduation project of Heiðar Arnar Kristjánsson and Harald F. Gíslason from the Iceland University of Education. Their efforts became an instant hit with both kids and adults alike. The two were joined shortly afterwards by two other members, Arnar Gíslason and Guðni Finnsson, who have performed in the bands Dr. Spock and Ensími. The foursome has released two subsequent albums: Meira Pollapönk in 2010 and Aðeins Meira Pollapönk in 2011. Heiðar og Haraldur first performed together in a band many moons ago, but didn’t exactly hit the big time. Many of their songs have received extensive airplay in their native Iceland and some of their songs such as Leyniskápurinn (The secret cupboard) and Þór og Jón eru hjón (Þór & Jón are married) and have gotten tens of thousands of hits on Youtube. Their song Enga Fordóma deals with the experiences of a young man who stammers a lot – they hope their song will help put bullying and the problems people with speech impediments face firmly on the agenda.

The EBU have announced that 41 countries will compete at the Eurovision Song Contest 2020 to be held next May in Rotterdam, The Netherlands. This is the same number of countries that appeared last year. Read more
Read more

Get ready to hear “Open Up” a lot up until and during next year’s Eurovision Song Contest to be held in Rotterdam, the Netherlands. Today, next year’s slogan was presented. Read more
Read more

It takes less than two hours to drive from the Belgian capital Brussels to next year’s host city Rotterdam. The country with the shortest distance to go became the first to announce their 2020 Eurovision Song Contest participant.  Read more
Read more

Rotterdam has been selected as the host city of the 65th Eurovision Song Contest in May next year. The Netherlands have hosted the competition four times, but this will be the first time that the event has been hosted by Rotterdam. Read more
Read more